Bounce is a main character in Miss Spider's Sunny Patch Friends. He is a blue-colored bedbug and one of Miss Spider and Holley's three adoptive and overall eight children.

Bounce adds comic relief to the series. Except none of his comic relief is funny. You would laugh more when you get hit in the face with a football more than you'll laugh at this devil spawn. He is aptly named; Bounce will jump anywhere and everywhere because he is always on LSD. Despite being unrelated, he and Dragon are the closest of friends. They are "best bug buddies," always appearing by each other's side.

"This 7 year old little bed bug is the clown of the pack. He does everything at lightning speed, which means he often acts and speaks before he thinks. He's very forgetful. "Oops. I forgot" is his refrain, but he means well so it's easy to forgive him. Miss Spider is always trying to get him to eat a good meal because he can go days without eating. When he does sit still long enough to eat, he's ravenous and can wolf down everything in sight."

Bounce is coloured mostly cerulean blue, with a pair of green antennae and large teeth. He has two yellow eyes with black pupils and red eyelashes. His legs are short, and he wears red shoes. He also has no arms. 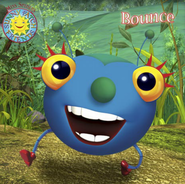