Dragon is a main character in Miss Spider's Sunny Patch Friends. He is a purple dragonfly and one of Miss Spider and Holley's three adoptive and overall eight children.

Dragon is Bounce's best friend and one of Miss Spider and Holley's three adoptive children. He is shown to be bossy and a little arrogant toward his siblings. Dragon disapproves of other characters expressing their feelings (mainly Squirt), calling it "uncool" to cry. Even though he can be unfriendly at times, Dragon truly cares for his friends and is always there for them when they need him most. Dragon dreams of joining the Flying Aces (a group of dragonflies performing in-air stunts across Sunny Patch), but feels more at home with his friends.

"At nine years old, Dragon is the oldest of the bug pack and always looking for room to soar. He's an amazing aerialist with the ability to fly forward and backward. He acts and talks tough, never letting anyone forget that he survived in the Snakey Woods all by himself. Although he loves his adoptive parents and siblings, he still is on the lookout for his dragonfly family."

Dragon is mostly an amethyst purple colour. He has four clear wings with a silver tint and six legs. In the series, he has a pair of large light blue eyes with dark blue pupils. In the Miss Spider's Sunny Patch Kids special, he has dark blue eyes and green pupils.

Dragon appears in nearly every episode of the series. He first appeared in the TV movie, Miss Spider's Sunny Patch Kids. His first official appearance was in the series premiere, I'll Fly Away, and his last appearance was in the series finale, Cob Fog. He is absent in several episodes; his first absence is in Something's Stinky in Sunny Patch and his final absence is in Hide and Sleuth. 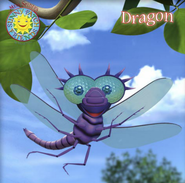