Shimmer is a main character in Miss Spider's Sunny Patch Friends. She is a bright pink-coloured jewel beetle and one of Miss Spider and Holley's three adoptive and overall eight children.

"Shimmer is an 8-year-old Jewel Beetle. Her iridescent thorax wows other bugs, but she is much more than just a beautiful bug. She is a very strong-willed and resilient kid. As the big sister in her adoptive family she leads the way, relying on special heat sensors in her legs and her unmatched intuition. One of her favorite pastimes is going to the meadow to chow down on a field of flowers."

Shimmer is mostly a bright pink colour. She has six green legs, two of which are used as arms. Shimmer also has a shiny orange shell covering her two mauve wings and a pair of green antennae. Her eyes are green with purple pupils. 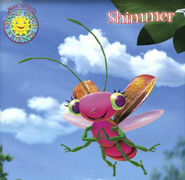